From Vanilla Orchid To Vanilla Bean

Mexico is the country of origin for the vanilla orchid called Vanilla planifolia. There in the present state of Veracruz the orchid has been cultivated since the 15th century. Since then many places mainly around the equator started to cultivate the orchid. This orchid loves tropical conditions. The orchids require a tree for them to attach their vines too. Once they have found a tree they will climb to the top of it. If it is a high tree this can proof to be difficult for their growers to retrieve. For this reason growers carefully lift the top ends of the vines and redirect them downwards. The limited height the plants reach then directly has a positive influence on an increased number of blossoms and the plants are easier to manage. 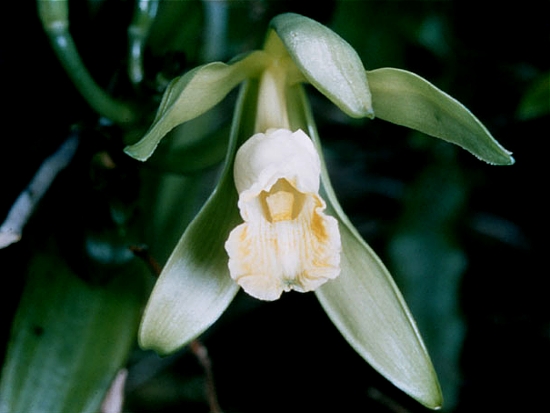 The first vanilla orchid plants that were grown outside Mexico didn’t show any orchid fruits. The vanilla pods only ripen on pollinated blossoms. This was done in Mexico by a small native stingless bee called Melipona bee. The way to go for today’s main vanilla producing countries is pollination by hand. This task is quite laborious and becomes even more labour intensive by the fact that the orchid only blooms for one day per year and then only for a morning.

After pollination it takes another six months for the pod to ripen. Pods that show a pale yellow colouration at the distal end are ready for harvest. Again this is a labour intensive process. Each fruit ripens in its own time and over ripeness reduces its value.

The fruit still needs a lot of care until it reaches the market. The process is called curing and consists of killing, then sweating, then slow-drying to reach the final step of conditioning the beans.

The killing process initiates enzyme activity that is responsible for the flavour development. Originally this was done by the Aztecs by letting the pods brown in the sun. Today different methods are applied from heating in hot water or in an oven to freezing or scratching.

The sweating step keeps the beans closely staked in rolled up bundles and insulated to keep temperatures high between 45 to 65C° and under humid conditions. By the end the vanilla pods still have a moisture content of 60-70%. The drying stage reduces the moisture to 25-30% to prevent rotting and to lock the aroma. It is a most delicate step since it requires the bean to be dried evenly for an even vanillin content at the end.

The last step is the conditioning. This means that the beans are locked up in closed containers for up to 6 months to mature their fragrance. After this last step the grading takes place. The grading A to C is determined by the pods length. A is 15 cm and longer and B is 10 to 15 cm and below 10cm is graded as C. The grading then establishes the amount of pods per kg.

After all this labour, knowledge and experience that goes into producing vanilla from a vanilla orchid it is no wonder that vanilla is one of the highest priced spices. It ranks just below saffron.

Do you love using the flavour gained by harvesting and curing the pods of the vanilla orchid in your recipes? What are your favourite ones?

Vanilla is one of the most popular flavour in recipes.

Do you love vanilla?

What is your favourite recipe you use it in? Share it and if you have post a photo with it.